Andrés Manuel López Obrador of the the leftist Morena party governs with a strong political mandate, as a Morena-led coalition has a majority in both houses of Congress. 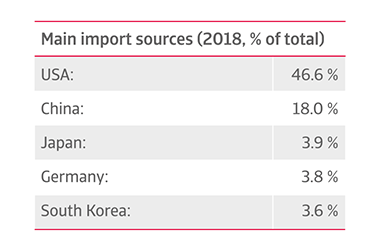 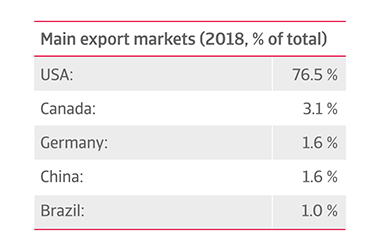 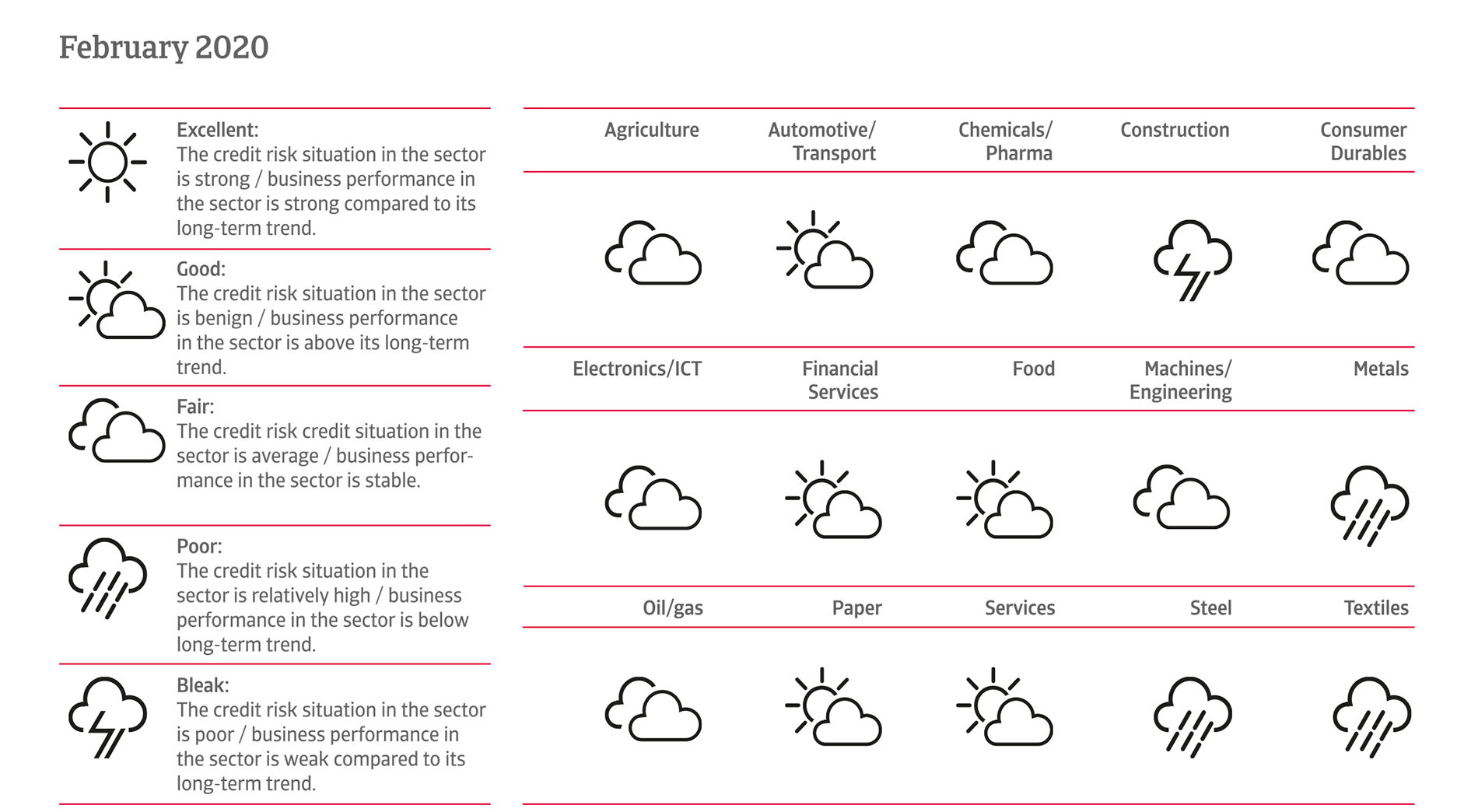 He has taken some popular measures, including raising the minimum wage, reducing government salaries (including his own) and creating a national guard to combat drug trafficking.

However, it seems that President López Obrador will struggle to meet the high expectations for a fundamental change among voters and political allies, given the intractable nature of Mexico’s social ills, such as poverty, violence and corruption. High crime rates and endemic corruption continue to undermine the business environment and state functions. 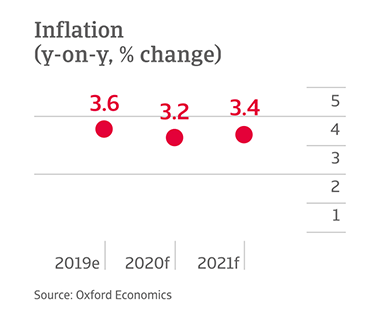 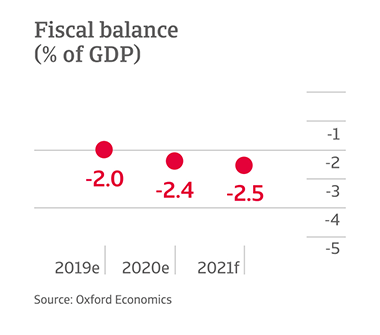 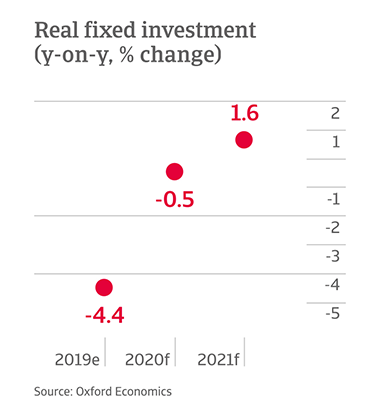 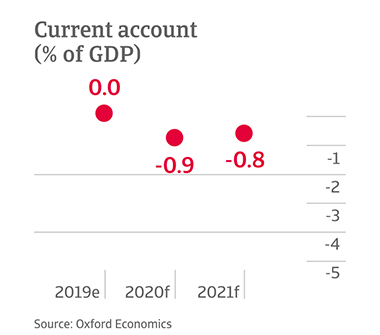 While Mexico’s economy is generally diversified, it remains closely synchronized with the US business cycle. The US accounts for more than 75% of exports (more than 25% of Mexican GDP) and is the main source of remittances (about 2% of GDP). Mexico´s dependence on oil revenues has further decreased, but is still significant (6% of goods exports, 8% of GDP and 18% of government revenues).

The Mexican peso is vulnerable to shifts in market sentiment, due to a large stock of inward portfolio investments (more than 270% of official reserves) and the fact that it is the most traded emerging market currency. The peso is expected to remain volatile in 2020, while a sound policy framework, a healthy banking system and solid external balances underpin strong shock resistance.

Since 1994, average annual real GDP growth was just 2.5%, mainly due to low investments and weak productivity. GDP is forecast to level off in 2020 and to grow only about 1.0% in 2020, partly due to fiscal austerity and a slowing US economy. However, the main reason for subdued growth is increased uncertainty, which has led to lower private consumption, a weakening of business sentiment and a contraction of private investments and factory activity. This uncertainty partly stemmed from policy and trade issues with the US in 2019. President Trump called off threatened tariffs on all Mexican imports in June 2019 only after the Mexican government agreed to curb rising Central American migration through Mexico to the US.

Another issue that has negatively impacted business and consumer sentiment is ongoing concerns about President López Obrador´s economic policy direction. Doubts over the enforcement of contracts have increased, especially after the decision to cancel Mexico City’s new airport plans following a (controversial) public opinion poll. President López Obrador also started to reverse landmark energy reforms made by his predecessor Peña Nieto. Oil auctions were suspended amid other moves to reassert the dominance of the state-owned oil company Pemex.

The modest economic rebound expected in 2020 will be supported by public investments and a looser monetary policy. Declining inflation enabled the central bank to cut its policy rate several times since August 2019. Additionally the US ratification of the USMCA agreement should help to support growth. USMCA is effectively a small modification of the pre-existing NAFTA agreement.

Despite some controversial economic policy actions by the government, its fiscal policy has been prudent so far. However, there is a risk that the government´s commitment to fiscal discipline will fade should the economy fail to recover.

The government debt structure is generally favourable (68% in local currency). The main vulnerability is a relatively high share of debt held by non-residents (48%), but refinancing risks are mitigated by a favourable maturity structure (average maturity of more than ten years), and prudent debt management. The vulnerability to oil price declines has been mitigated by fiscal reform and an oil price hedge. However, the financial situation at Pemex has become more uncertain following the shift from exploration to loss-making refining. A potential need of further financial support for Pemex constitutes a risk for government finances.

Strong shock resistance of the economy

Despite the ongoing economic policy uncertainties, Mexico seems to be quite resilient when dealing with them due to strong economic fundamentals. A steep deterioration of the economy seems to be rather unlikely.  Exchange rate fluctuations serve as a shock absorber for the economy, helped by the fact that Mexico´s foreign currency debt held by the public and private sector remains limited.

The (mainly foreign-owned) banking system is profitable, well regulated, supervised and capitalised. Non-performing loans are stable at 2.1% and fully provisioned, while dollarization (14% of credits and 20% of deposits) and reliance on foreign funding are low, reducing exposure to external shocks. Both government debt and external debt are sustainable, with the latter having stabilised around a relatively low 37% of GDP (65% owed by the sovereign). The debt service ratio remains low, which also reflects a lengthening of maturities by both the government and corporations. Current account imbalances remain modest and fully financed by foreign direct investment (FDI).

The international liquidity position is adequate with abundant official reserves (about four months of imports, abundant to cover 2020 external refinancing needs). Reserves are underpinned by a precautionary IMF Flexible Credit Line, which in November 2019 was extended for another two years (upon request of the Mexican authorities it was further reduced to USD 61 billion, down from USD 74 billion). The Flexible Credit Line reduces transfer and convertibility risks. Access to capital markets is still solid, which is reflected in several international bond issues, in 2019, by the sovereign and the private sector, including Pemex.

The economic impact of USMCA on Mexican-US trade is likely to be limited, as it is effectively a small modification of the pre-existing NAFTA agreement.

Although Mexico is well-positioned to withstand shocks, as its external finances remain strong, the country’s economic outlook is weakening.