A hard Brexit and an escalation of EU-US trade disputes are downside risks for export-dependent food companies in the olives/olive oil and meat segments. 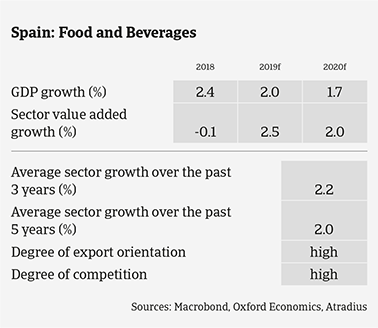 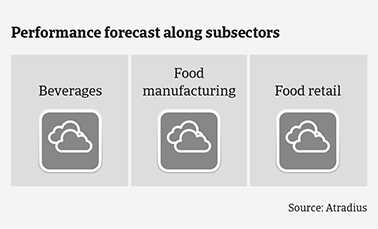 Turnover in the Spanish food and beverage industry increased 0.1% year-on-year in 2018, to EUR 116,890 million. While the sector has recorded turnover growth for five consecutive years, sales expansion is expected to remain modest in the near-term.

In general, profit margins are tight in the industry, as price pressure from large distributors force food producers and processors to adjust. A general profit margin decrease cannot be ruled out in the coming months due to weaker global demand.

In the meat subsector pork meat processors are currently facing difficulties due to high slaughter prices for pigs (caused by the African swine fever epidemic in China). Value added growth in the meat segment is expected to contract slightly (down 0.1%) in 2019. Value added growth in the dairy sector is forecast to increase by about 2% in 2019 and 2020, but low sales prices and strong competition have an impact on margins.

Olive and olive oil account for about 8% of total Spanish food production. The US is the largest single market for Spanish table olives, accounting for more than 20% of exports. In August 2018 Washington already imposed 27% tariffs on imports of Spanish black olives based on allegations of unfair subsidising, leading to a revenue loss of about USD 50 million to date. The recently imposed US tariffs (up 25%) on EU imports, including Spanish olives and olive oil, pose an even greater threat to the subsector. While sales have not yet deteriorated, financial pressure on producers and processors could increase in the coming months.

Payments in the Spanish food industry take 60 days on average, and we expect no increase in payment delays and insolvencies in 2020. However, if downside risks materialise (a hard Brexit, no solution or even escalation in the EU-US trade dispute), a deterioration of businesses´ credit risk cannot be ruled out, mainly affecting export-dependent food companies.

Our underwriting stance on the food sector is generally neutral. The industry has to be closely monitored, considering a potential slowdown in demand and increased downside risks in the global economy, which could impact profitability and credit risk of food businesses.

Many food businesses show high short-term gearing. The willingness of banks to lend is a key factor in our risk assessment, as well as the lending conditions and how the debt is split between the short- and long-term, the evolution of debt and the credit lines utilisation rate.

We are currently more restrictive on fruit and vegetables (olives and olive oil) and pork processing due to the current issues. As those segments are highly exposed to US tariffs we have made special reviews for all businesses we believe could be affected (e.g. estimating the effects based on the percentage share of their exports to the US). The fruit and vegetables segment already struggles with tight margins and fierce competition from countries with lower labour costs.

Lower demand coupled with decreasing sales prices and higher prices for iron ore have led to deteriorating margins of steel producers and distributors.

Larger suppliers could seize the opportunity of buying distressed smaller players in order to expand market share and bargaining power against OEMs.