For UAE construction businesses financing remains an issue, as both gearing and dependence on bank loans are high, while banks are reluctant to provide loans 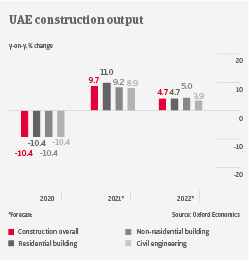 After a 10.4% contraction in 2020, UAE construction output is forecast to rebound more than 9% in 2021. However, the recovery of the property market, which is still struggling with overcapacity, remains rather uncertain. The industry was already performing poorly before the coronavirus outbreak, as modest economic growth over the past couple of years prevented higher spending on building projects. This led to increased cash difficulties and tight margins for construction businesses, especially for smaller companies.

High prices for building materials and commodities have put gross margins under pressure, and the ability to pass them on to end-customers is limited in a fierce competitive environment. The pandemic has resulted in a shortage of construction workers from Asian countries like India and Pakistan, as in H1 of 2021 most flights were suspended. This has led to increased labour costs and several project delays.

For UAE construction businesses financing remains an issue, as both gearing and dependence on bank loans for project funding are high, and banks have become reluctant to provide loans to builders over the past couple of years.

Payments in the construction industry take about 180 days on average. Due to strong competition, low margins and a lack of bank financing, the number of protracted payments has been high over the past two years, and the number of non-payment notifications is expected to remain elevated in the coming months. In March 2021 Dubai's biggest contractor Arabtec filed for bankruptcy. While insolvency proceedings are rather uncommon in the UAE, there have been some sizeable runaway cases in the construction industry, leaving behind unpaid creditors and bank loans. More such cases cannot be excluded in the short- and mid-term.

As vaccination campaigns are underway, the world economy is recovering from the pandemic. Advanced markets generally have higher vaccination rates than emerging markets

A long journey towards an African Free Trade Area

The African Continental Free Trade Area has raised opportunities for both African and non-African companies. The agreement could contribute to growth after the negative impact of the Covid-19 pandemic

Asia: half of all credit sales overdue during pandemic

One year into the pandemic, businesses polled in Asia told us they experienced serious setbacks to growth and needed to take several measures to face the changed economic and trade circumstances.