Cyprus's economy is on solid ground but crisis legacies persist.

Cyprus has made significant progress since its 2013 financial crisis, when a EUR 10 billion EU/IMF programme was required to improve government finances and to sustain the banking sector as well as international competitiveness. Since exiting the programme in March 2016, the country is on much more solid footing than before, but some vulnerabilities persist.

Political stability not an issue

President Nicos Anastasiades was re-elected for five years in the February 2018 presidential elections. A new minority government was formed in March, comprising of DISY (liberal conservative), DIKO (centrist), and independent ministers. Recent European parliamentary elections have confirmed the picture of this political landscape. The next parliamentary elections are due in 2021.

In July 2017, the reunification talks that had started in May 2015 stopped, as political changes in both the Republic of Cyprus and Turkish Cyprus put pressure on President Anastasiades and his Turkish Cypriot counterpart, Mr Akinci (both considered as moderates). The main issues preventing any progress are (i) the Cypriot precondition that Turkish troops have to withdraw from the island for unification to take place; (ii) the Turkish Cypriot demand of participation in a future government; and (iii) Turkish off-shore hydrocarbon drilling in Cyprus’ exclusive economic zone. Cyprus, with EU backing, insists that unification talks will not resume until Turkey stops interfering. Due to all those contentious issues the likelihood of progress in the coming year or two is low.

Since 2015 the economy has rebounded from the 2013 crisis, and in 2018 GDP expanded 3.9%, mainly due to solid domestic demand. Robust employment growth, higher wages and modest inflation supported private consumption. Unemployment has decreased to 7% from its crisis peak of 16%. Investment grew a solid 8.3% after recovery rates of 42% and 29% in the previous two years, largely in the real estate sector. Government consumption growth accelerated as the fiscal stance relaxed somewhat. 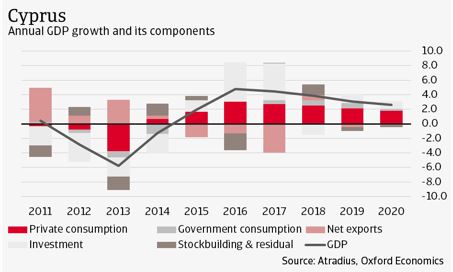 In 2019 a GDP growth rate of 2.8% is expected. This modest slowdown is partly due to lower eurozone demand and weaker tourism, which is impacted by Brexit uncertainty (33% of tourists are from the UK). Additionally tourist arrivals are affected by  recovered competition from Turkey and Egypt as destinations and the insolvencies of a few airliners servicing the country. In 2020 domestic demand will continue to drive economic expansion in Cyprus, but the growth rate will again remain below 3%, due to approaching boundaries of productive capacity and a weaker external environment.

Fiscal policy has remained prudent since Cyprus exited the EU/IMF programme in 2016. In combination with strong GDP growth this has led to budget surpluses, and in 2018 an overall surplus of 3.2% was achieved (excluding one-off items). Tax revenues grew by 7.7%, with VAT revenues growing by 13.5%, while expenditure growth remained below GDP expansion. In 2019 and  2020 the surplus is forecast to be slightly lower (2.9% and 2.6% of GDP respectively) due to slight fiscal loosening. In any case, this is well above the EU’s fiscal rule which implies a neutral balance.

Government debt is on a downward trend. In 2018 gross debt amounted to 103% of GDP, inflated by a one-off item, with a significant impact. In 2019 and 2020 the figure is expected to improve to 96% and 89% respectively. While there is still a court case pending related to the public wage cuts, regardless of the outcome the downward trajectory of public debt is not in jeopardy. Moreover, debt composition is favourable, with 47% owed to official creditors, a share that is to decrease as Cyprus increases its recourse to capital markets and will start to gradually repay ESM loans in 2025. Short-term debt amounts to 4% of official debt. Gross financing needs, moreover, are limited to below EUR 2 billion in the medium-term (until 2023) with a nine-month cash buffer maintained. 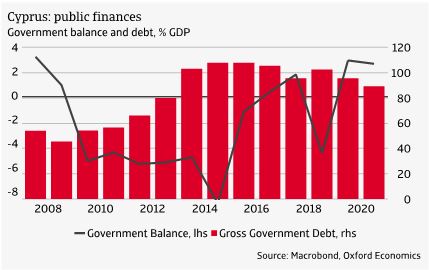 Banking sector a work in progress

Cyprus’ main weakness lies in its banking sector, where very poor asset quality and high rates of non-performing loans (NPLs) still dominate. This constrains new lending and bank profitability. However, there have been some improvements, as NPLs were brought down from above 44% of total loans to 32% in 2018 (still the highest in the eurozone by far). The acquisition of Cyprus Cooperative Bank’s (CCB) good assets by Hellenic Bank and the securitisation of the Bank of Cyprus contributed positively to this reduction.

Meanwhile, further steps are being taken to address lingering vulnerabilities. The legal framework for NPL securitisation and sales of loans were reinforced, just like the one for foreclosure and insolvency (adopted by parliament in July 2018). The Estia subsidy scheme launched in September 2019, is offering restructuring and state transfers for borrowers to repay loans. These measures support further NPL reduction, although only at a very gradual pace. The acquisition of CCB assets will further drive up concentration in the sector; Hellenic Bank and Bank of Cyprus are by far the largest two.

More capitalisation is expected, underpinned by the above mentioned transactions and capital issuance of large institutions. Liquidity has improved as lending has been constrained, leading to continued improvement in the loan-to-deposit ratio: 80% March 2019 (113% end-2016). The ECB emergency liquidity assistance has been repaid. Foreign deposits are declining, but still amount to a significant amount of the deposit base, which would be confidence sensitive in times of stress.

In the period leading up to the banking crisis (2005-2012), Cyprus ran annual current account deficits of 7.8% of GDP on average. While the deficit narrowed to 1.5% in 2015, it started to gradually widening again since then as internal demand rebounded, particularly due to import-driven construction investment. This more than outweighed the gains in competitiveness, as expressed in the real effective exchange rate (REER) development of Cyprus in relation to other countries. In 2018 the current account deficit was 6.9% of GDP, and will even climb to about 9% of GDP in 2019 and 2020, after which some reduction is expected.

The result is that the gross external debt position has not materially improved since the crisis. In 2018 it stood at the still extraordinarily high level of 551% of GDP, only slightly improved compared to 2013 (590%). That said, gross foreign debt as a percentage of exports of goods and services is now markedly lower, at 650%, almost 50% lower than the pre-crisis level. Moreover, net external debt lowered to 106% of GDP in 2018, compared to 142% of GDP in 2013. 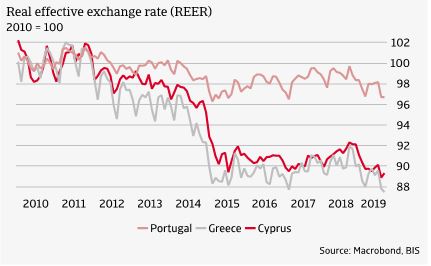 The important note for the external picture is that a significant part of the current account deficit is due to the activity of special purpose vehicles (SPVs; in shipping and financial services) that are registered in Cyprus, but have very limited physical presence in the country. If one adjusts for that, the 2018 deficit was a more modest 2.6% of GDP. At the same time, net external debt adjusted for SPVs provides a small positive figure.

Cyprus economic recovery has been strong as  government finances are in a relatively healthy – or at least much improved – state. The crisis in the banking sector has ended, an competitiveness has been regained to a large extent. However, a number of risks remain. The debt restructuring still has long way to go, with private sector leverage remaining high, posing a risk to the still fragile banking sector. Investment growth is too much focused on construction only. External threats are rising due to Brexit uncertainty with a potential disorderly exit, dampening tourism exacerbated by airline bankruptcies, as well as lower trade and investment.

Political tensions with Turkey are far from over, as Ankara seems to be determined to continue searching for oil and gas off the Cypriot coast. At the same time, any settlement to the island’s division, as improbable as it currently seems, could provide a further boost to economic development.

Financial conditions in Turkey will be tighter in the coming months.

The plastics segment is impacted by environmental awareness and stricter regulations, which could negatively affect businesses in the near future.