The global economy is losing momentum, feeding into the first annual upturn in corporate insolvencies across advanced markets since the global financial crisis in 2008 and 2009. From 3.2% in 2018, global economic growth is forecast to slow to 2.6% in 2019, two percentage points lower than expected three months ago. Trade policy uncertainty is a main reason for lower business sentiment and investment growth, increasing financial risks. Accordingly, we now expect global corporate insolvencies to rise 2.8% in 2019, 0.8 percentage points higher than expected last quarter. The upward revision comes primarily through worse-than-expected insolvency developments in North America, which is now expected to surpass Western Europe in the rate of insolvency growth. Asia-Pacific is also expected to see steady increases.

Looking forward to 2020, monetary policy loosening across developed markets, especially the United States, should provide some support for economic growth and corporate activity. Global GDP growth is forecast to accelerate slightly to 2.7%, but this is contingent on progress in resolving trade differences. With no end of trade tensions in sight, investment will remain subdued and financing risks are rising. Therefore, insolvencies are expected to increase slightly again, by 1.2% globally. 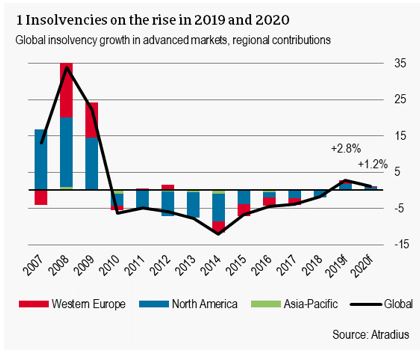 The number of Western European businesses going bankrupt in 2019 is expected to increase 2.7%. This marks the first annual increase for the region since 2013 and is the bleakest regional outlook. In 2020, a small increase of 0.7% is forecast. Slowing economic growth, the escalation of the US-China trade war, and looming uncertainty surrounding Brexit and Italian politics are the key drivers of the upswing in business failures across Western Europe. Those factors also pose negative risk to financial stability and corporate solvency in 2020.

The United Kingdom is facing the highest increase in insolvencies in both 2019 and 2020 not only in Western Europe, but also across all countries analysed. The upward trend in business failures observed in 2018 has continued in H1 of 2019, up 8.9% year-on-year. The second extension of Article 50 pushed back the UK’s departure from the EU to October 31, delaying the recovery of sterling, keeping inflation elevated, and prolonging the drag on business investment from uncertainty. Those factors will continue to challenge businesses as Brexit day approaches and the risks of departing without any deal increase, leading us to increase our 2019 forecast to another 10% rise.

2020 will be another difficult year for UK businesses with a more modest 5% increase expected. This forecast is based on a meagre 1.4% expansion of the economy under the scenario that an extension of Article 50 in October leads to a smooth transition in H1 of 2020. It is just as likely that an extension leads to a general election, which would extend the period of uncertainty and put upward pressure on the number of business failures.

Outside of the eurozone, Switzerland is also contributing significantly to the region’s upward trend. The number of Swiss business insolvencies has been steadily increasing since 2015, in the aftermath of the eurozone debt crisis and following the scrapping of the Swiss franc’s ceiling against the euro. In 2019, another 4% increase is expected in Swiss insolvencies, marking another year of record-high business failures. Global trade uncertainty has increased demand for the Swiss franc, a safe haven currency. On top of eurozone weakness, the franc has appreciated 5% against the euro since April 2019 and is currently at a two-year high. Currency strength particularly challenges the hospitality sector which is facing the second highest insolvency numbers behind construction. Swiss exporters are also negatively affected as exports comprise two-thirds of Swiss GDP. In 2020, we expect to see some stabilisation of insolvencies at high levels, with a -1% change forecast. Risks – especially external demand and capacity constraints – remain to the downside.

Insolvencies in the eurozone as a whole are forecast to rise 1.2% this year, the first increase since 2013. Economic expansion in the region is cooling down in 2019 with a subdued 0.2% GDP growth recorded in Q2 of 2019. The current slowdown is broad-based with industrial production notably contracting 1.6% in June. As the manufacturing sector struggles due to weak external demand, domestic demand is propped up by strengthening labour markets but the outlook here is waning. According to the 2019 Q2 ECB bank lending survey, credit standards tightened for loans to businesses, marking the end of an easing period that began in 2014. The survey points to no change in credit standards for businesses in Q3. With respect to ECB policy, an easing of the monetary stance is expected in September, by means of a small cut in the policy rate (which is already at zero) and perhaps a reactivation of the asset purchasing programme. This should bode well for lending conditions going forward and help eurozone businesses but the insolvency outlook for 2020 remains subdued.

Growth in Germany is cooling from 1.5% in 2018 to 0.9% in 2019. Weak external demand and elevated uncertainty continue to take their toll on German industry. Prospects for the export-reliant industrial sectors remain bleak in the short term. The automotive sector in particular will likely continue to grapple with the deterioration in the external environment, as well as lingering uncertainty about trade policy and consumer preferences. That said, domestic demand has proven to be quite resilient. German business insolvencies are expected to increase by 1% this year followed by stagnation in 2020.

GDP growth in the Netherlands should moderate to 1.5% in 2019. The Dutch manufacturing sector is facing strong headwinds from weak global trade, with high levels of uncertainty and struggling German industry. However, domestic demand remains robust. The labour market continues to be tight and employment growth remained strong in early 2019. Together with a gradual increase in wages, this should support an increase in private consumption. After several years of sharp decreases in insolvencies, this year is likely to mark a turning point. Business failures are expected to rise by 3% in 2019 and 1% in 2020. However, downside risks remain to the forecast as the potential negative effect of a no-deal Brexit (the UK is a major trading partner) is not taken into account in this insolvency outlook.

Economic growth in Spain is expected to be robust this year (2.3%), although slightly lower than the 2.6% growth posted in 2018. This good but declining growth has resulted in a slow recovery from the high level of insolvencies seen in the past. After a 4% increase last year, Spanish business failures are expected to decline 5% in 2019. Despite weakening economic prospects with high external risks and less dynamic investment, the level of insolvencies remains five times higher than before the crisis, offering ample room for decline.

Like Spain, the Portuguese economy has seen a swift recovery in recent years, which has positively affected the insolvency level. A 6% decline in insolvencies is expected in 2019 followed by a 2% decline in 2020.

In Italy, insolvencies declined 7% in 2018, despite a mild recession in the second half of the year. While insolvencies decreased about 6% in Q1 of 2019, we expect some lagged effects of last year’s recession to begin pushing up the number of business failures. Therefore we forecast a 4% increase in Italian insolvencies this year as economic activity stagnates in 2019 (+0.1% forecast). The insolvency outlook is subject to high political uncertainty, as tensions rise within the fragile governing coalition and may further increase between the Italian government and the European Commission. Any escalation is likely to weigh on sentiment and financing conditions of the private sector and could lead to a more protracted downturn.

In part due to ongoing Brexit uncertainty, Ireland’s insolvency outlook is weak, but following a very strong decrease in H1 (down 28.7%), we no longer expect an increase in 2019. While Ireland is a highly open economy, the bulk of exports are pharmaceuticals and ICT services, goods and services that are not overly vulnerable to fluctuations in external demand. However, the economy is cooling off and demand in export markets is set to remain weak while the domestic economy faces increasing capacity constraints and lower government spending. As a result, insolvencies are forecast to tick up in 2020 by 2%. However, this forecast is subject to downside risk in case of a no-deal Brexit either in October or early next year due to Ireland’s close economic ties to the UK.

This year is expected to mark a reversal in the downward trend of annual insolvencies in North America observed since 2010. Similar to Europe, insolvencies are on the rise due to lower economic growth and high (trade) policy uncertainty. In 2019, we project a 3.2% increase in business failures in the region. In 2020, both the US and Canadian economies are expected to slow down further, leading to another 1.7% increase – the weakest regional figure next year.

Corporate bankruptcies in the United States have reversed their decade-long downward trend. Up 2% in H1, US businesses have been facing higher financing costs than a year before, a strong dollar, and the unwinding of pro-cyclical fiscal policy. Moreover, trade policy uncertainty and higher tariffs on Chinese imports in particular are beginning to bite. As such, we expect the upward trend observed thus far in 2019 to continue, pushing the total 3% higher than in 2018. Monetary policy loosening should offer some support to US businesses going forward and private sector confidence remains high. However, the latest escalation including a 15% tariff on USD 300 billion of consumer goods from China slated for later this year could hurt the fragile retail sector in particular, especially next year. Ongoing trade tensions and increasing financial vulnerabilities in the corporate sector are expected to increase US insolvencies another 2% in 2020.

Canada’s economy is slowing down more than expected with H1 of 2019 marking the weakest consecutive two quarters since its 2015 recession. Insolvencies have swung upward in the first five months of the year, up 9% year-on-year. These figures motivated the largest revision this quarter, from no change to a 5% increase now forecast for the full year. The large increase is in line with mounting economic challenges such as higher interest rates, weak business investment, and lower oil output. While GDP growth is forecast to slow further in 2020, the labour market should remain strong and interest rates are expected to decrease, supporting domestic demand as industrial production picks up again. Insolvencies in 2020 are expected to decrease slightly by 2%.

Japan is expected to see a modest 2% rise in insolvencies. The manufacturing sector in particular is struggling with a cyclical deterioration in capital spending and the stronger yen (safe haven status in trade war) affecting exports. In 2020, those challenges are expected to persist and growth prospects are expected to be further constrained by the anticipated consumption tax rate hike in Q4 of 2019. Therefore, another year of 2% insolvency growth is forecast.

The region’s weaker outlook compared to last quarter is driven by an upward revision to Australia’s forecast. Economic weakness from H2 of 2018 carried into a weaker-than-expected Q1 of 2019. The downturn in the residential construction sector has deepened and is expected to continue. In response to weaker economic conditions, the central bank moved to cut rates, but with business failures already up 1.6% in H1, we expect a 2% increase in 2019. Prospects for 2020 are slightly brighter with a 3% decline forecast thanks to increased monetary support, government spending, and capital expenditure expectations. 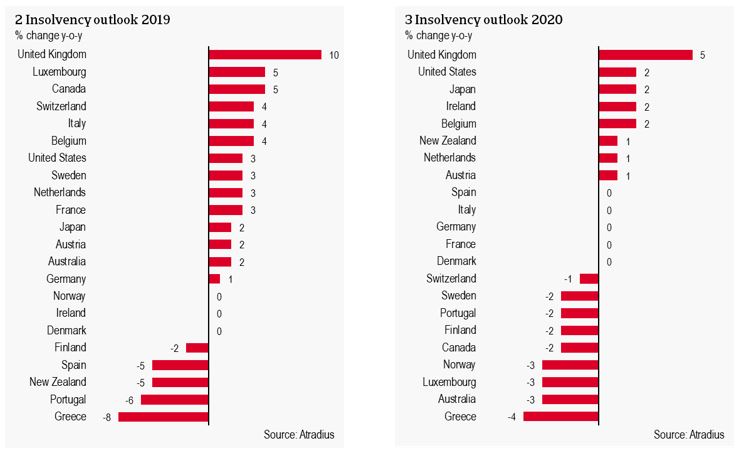 Private debt could amplify costs of the trade war

Private sector debt developments in the US and China probably won’t trigger an economic crisis but could deepen a downturn, possibly triggered by the bilateral trade war.

World trade growth stagnated in Q1 amid the escalating trade war. While we expect some recovery in 2019, further escalation of the trade war could grind growth to a halt.

The global economy is losing steam in 2019 and 2020. Ongoing uncertainty regarding the trade war continues to cloud the outlook.