According to the national association of construction companies (ANCE), in 2019 construction investment increased 1.7% year-on-year, to about EUR 130 billion. 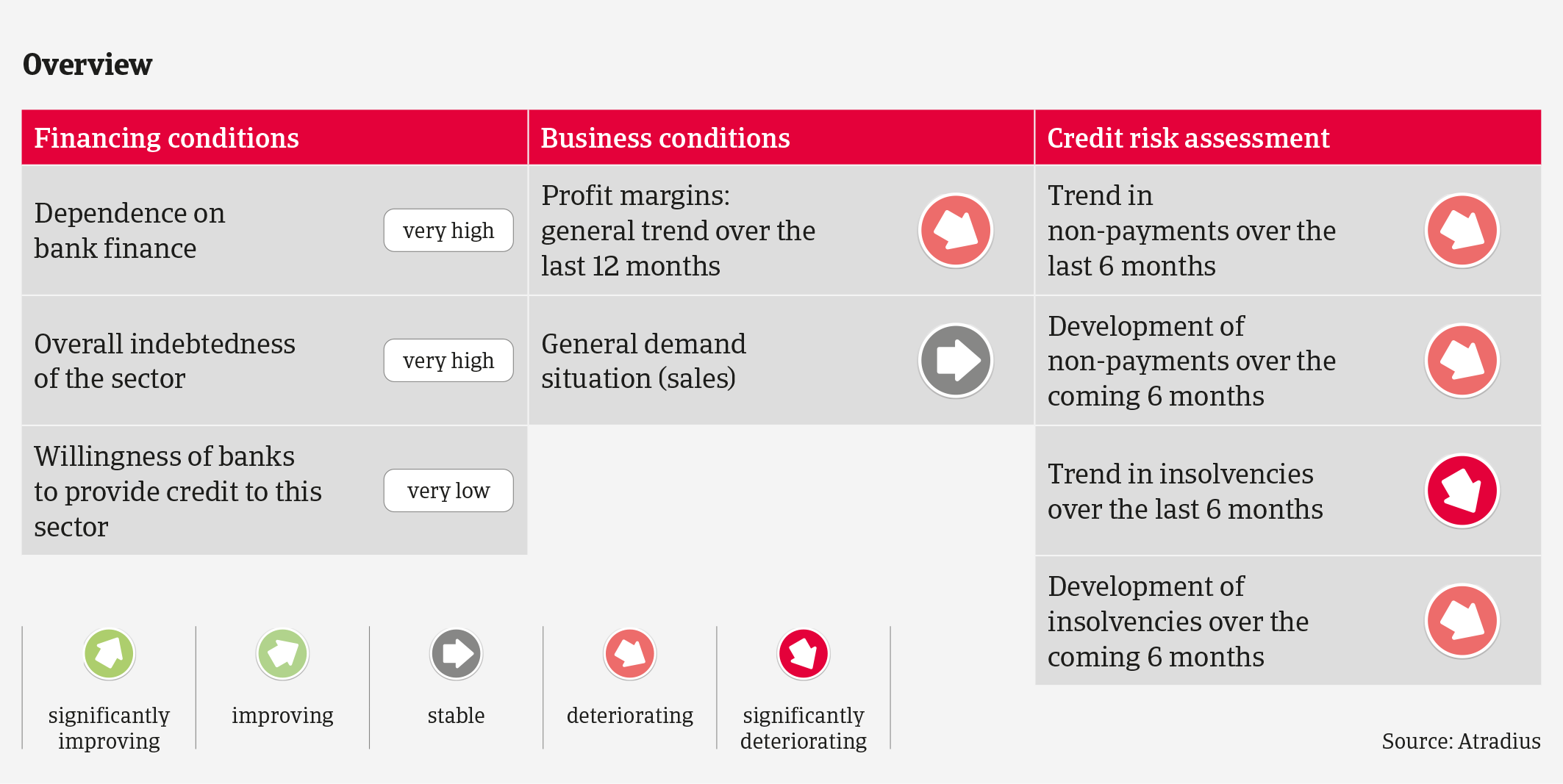 However, the industry has been severely affected by insolvencies of some major players and is facing one of the most challenging periods since the 2008/2009 economic crisis. The 2020 outlook remains uncertain due to continued subdued economic growth (forecast is a modest 0.3% in 2020) and persisting political uncertainty.

Residential building investment increased 5.4% in 2019 and renovation rose 0.7, supported by fiscal incentives. However, in Q4 of 2019 the number of permissions for new houses decreased 0.9%, which indicates slower growth in 2020. The average selling price for houses decreased by more than 15% year-on-year in 2019.

Commercial construction investment increased 2.5% in 2019, but will be impacted by lower business investment in the currently feeble economic environment.

Public construction investment increased 2.9% in 2019 after annual decreases since 2016. However, this rebound was not sufficient to balance the large 51% investment decline in the period between 2007 and 2019. Uncertainty about state investment, political support for future projects as well as frequent delays in public spending cast a doubt on growth expectations in 2020.

It was announced that public tenders will rise 39% year-on-year to EUR 40 billion in 2020, mainly driven by building projects of municipalities. However, it could take years until works start, mainly due to complicated legal compliance and delays in financial spending by the main state-owned assignors ANAS (roads, bridges, tunnels) and RFI (railway infrastructures).

Major financial difficulties for many businesses

Tight lending conditions set by banks remain a major issue for the industry, exacerbating the fact that many Italian construction businesses are highly geared. In Q3 of 2019 loans for non-residential builders decreased 30% year-on-year. By the end of September 2019 the construction sector had accumulated non-performing loans (NPL) worth EUR 16 billion, out of a total of EUR 55 billion corporate NPLs in Italy.

Financial difficulties are affecting the top-players as well as small- and medium-sized companies along the value chain. The slow or non-implementation of larger projects is a big issue. The average payment duration in the industry amounts to 200-240 days, mainly due to slow payments from public clients. Payment experience in the construction sector has been very bad over the past two years, and non-payment notifications were again at a very high level in 2019.

In 2019 five major players that were mainly involved in domestic public work went bankrupt. The main reasons were the length of the execution of public works, liquidity issues of public assignors, limited access to credit and the need to finance cash requirements through expensive instruments (such as bonds), as well as delays in works abroad (mainly in Venezuela and Algeria). 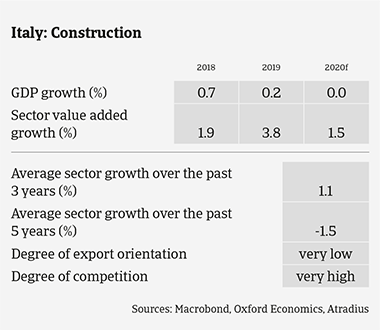 The business failures of those larger players have caused trouble for many subcontractors. Outstanding receivables, stop-and-go in public works and lack of credit led to many insolvencies of small- and medium-sized businesses. We expect that in 2020 both the number of non-payment notifications and insolvencies will remain high, with larger players continuing to struggle with liquidity issues.

The Italian government has meanwhile intervened and is trying to establish a major construction player, headed by Salini-Impregilo and involving other larger businesses. The aim is to establish a construction conglomerate, large and strong enough to better handle major public projects, and more competitive in foreign markets. However, this so-called ‘Progetto Italia’ project has not yet materialised.

Due to the adverse insolvency development, subdued demand, uncertainty about the future spending capacity of public bodies and their persistent bad payment behaviour our underwriting stance remains very restrictive for all the main subsectors, but especially for public construction. We are also restrictive on construction materials; however, in this segment we are seeing stable performance by high quality ceramics and tiles producers, with ongoing export opportunities. 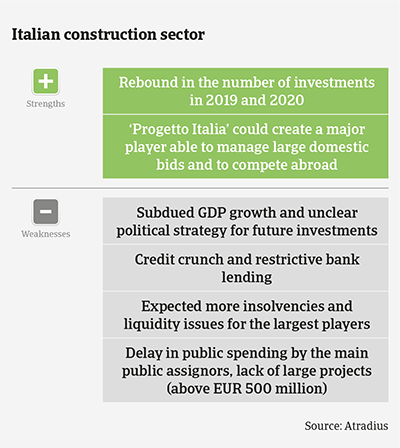 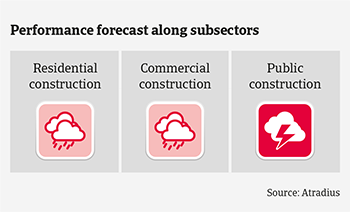 Due to economic stagnation, political uncertainty and tighter credit conditions business insolvencies are forecast to increase by more than 5% in 2019.

For many businesses both demand and profit margins are expected to deteriorate further, with a moderate rebound expected in H2 of 2020 at the earliest.

Italy: insolvencies again on the rise after some years

In Italy, business insolvencies are expected to increase in 2019, by about 4%. This is due to economic stagnation, increased political uncertainty and tighter credit conditions.