India: the country most affected by late payment

2018 brought many changes in India – more frequent payment delays, increases in the proportion of overdue B2B invoices and DSO, a longer payment duration.

2018 brought many changes in India – more frequent payment delays, increases in the proportion of overdue B2B invoices and DSO, a longer payment duration.

Based on the survey results, 2018 brought many changes in India – more frequent payment delays, increases in the proportion of overdue B2B invoices and DSO, a longer invoice to cash turnaround. The impact of late payment is undeniable, with a notable percentage of respondents reporting having to correct cash flow, the need to postpone their own payments to suppliers and that they lost revenue. Like in 2017, India recorded the highest proportion of uncollectable B2B receivables in Asia Pacific. Despite these changes, respondents remain optimistic about improvement in payment behaviour in the future. 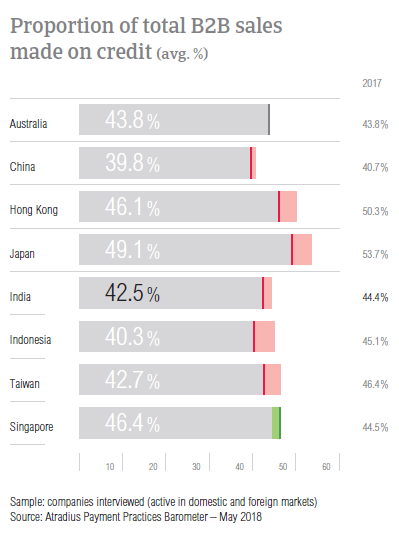 Respondents in India reduced their sales made on credit slightly from an average of 44.4% in 2017 to 42.5% this year. Indian respondents used credit in a higher proportion of sales to domestic B2B customers (on average, 49.0%) than to B2B customers abroad (36.0%).

We trade on credit to gain trust and long-term collaboration.

Companies in India grant trade credit to their foreign B2B customers because their customers demand it and to boost business internationally. Ease and convenience are also frequent reasons for trading on credit with B2B customers abroad. The top three reasons for refusing to grant trade credit to foreign B2B customers are: the poor payment behaviour of the customer (mentioned by 57.1% of respondents), a lack of information on the customer’s business and payment performance (38.1%) and high economic and political risk in the customer’s country (mentioned by 33.3% of respondents).

We trade on credit with foreign B2B customers to improve sales and because it is a common trend in the market.

From bad to worse

In 2017, the vast majority of respondents in India (93.7%) reported frequent late payments by their domestic and foreign B2B customers. 2018 brought another increase – and with an average of 94.7% of respondents reporting this, India has once more one of the highest frequencies of late payment in Asia Pacific. 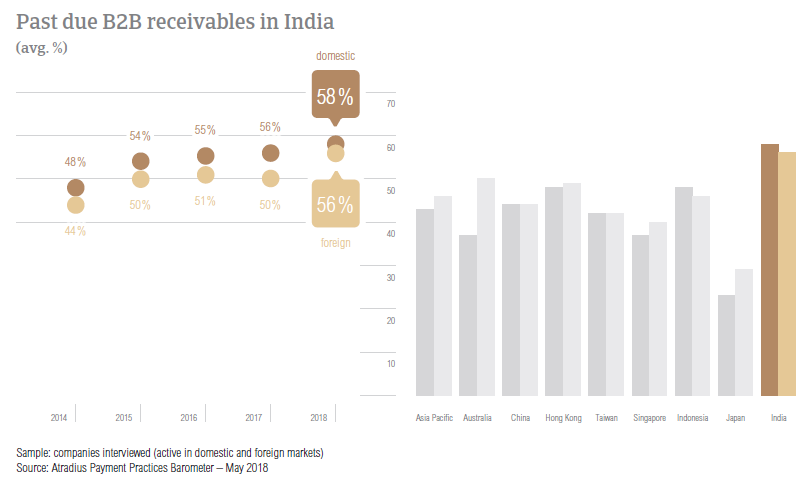 The Days Sales Outstanding (DSO) figure in India is 52 days and marks a third consecutive year of increase. This is the longest average DSO of the countries surveyed in Asia Pacific, much higher than the regional average of 40 days. Asked about the expected changes in their company’s DSO over the next 12 months, 35.3% of respondents said that they expect a slight increase and 24.2% a significant increase. A lower 20.3% of Indian respondents do not expect changes.

Domestic B2B customers of respondents in India are given, on average, 34 days to settle their invoices. This is six days longer than in 2017. In contrast, foreign B2B customers are given, on average, 29 days to fulfil their payment obligations – one day shorter than in 2017. The average payment terms recorded in India are in line with the averages recorded in Asia Pacific overall.

81% of respondents in India said that they are most likely to differentiate payment terms between domestic and foreign B2B customers. While 2018 survey results highlight that foreign B2B customers are given less time to settle payments, 47% of Indian respondents said that they would give their domestic B2B customers a shorter time to fulfil their payment obligations. This suggests that the domestic buyers of respondents who give their foreign buyers less time to pay receive significantly more time to pay than the foreign buyers. The main reasons for differentiating payment terms in India are internal policies, industry practices and domestic payment terms dictated by law.

Payment delays by domestic B2B customers seem to occur most often because of insufficient availability of funds. This was stated by the majority of respondents in India (57.3%). Late payment also occurred frequently because the goods delivered and services provided did not correspond to what was agreed in the contract. India had the highest percentage of respondents (40%) to mention this payment delay factor in regards to domestic B2B customers.

Payment delays by foreign B2B customers occurred mainly because the goods delivered and services provided did not correspond to what was agreed in the contract. This reason was mentioned by 45.3% of respondents in India – the highest percentage in Asia Pacific and significantly higher than the regional average of 31.9%. Another frequent reason for foreign payment delays was the complexity of the payment procedure mentioned by 40.7% of respondents.

Among the Asia Pacific countries surveyed, India had the highest percentage of respondents, 22.9% who reported that payment delays led to revenue loss. To manage the impact of overdue invoices 34.3% of respondents in India mentioned the need to take specific measures to correct cash flow and 32.8% that they needed to postpone payments to their own suppliers.

Where paperless invoicing seems to be the norm 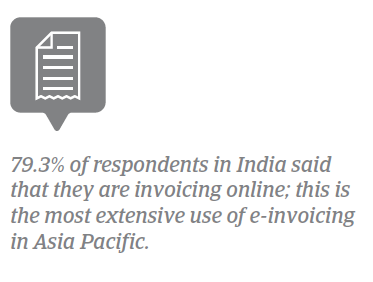 Asked about the effect of electronic invoices on payment duration, the vast majority of respondents (91%) said that payments were received faster. In contrast, only 3% seem to have experienced a slowdown and 6% of respondents believe that e-invoicing has no noteworthy effect.

Despite the uniform perception that e-invoicing speeds up payment, India saw the most severe deterioration in payment behaviour in Asia Pacific. More specifically, the average payment duration increased from 63 days in 2017 to 74 days in 2018.

19% of respondents in India to benefit from protectionist measures

While most respondents in Asia Pacific fear turnover losses due to trade uncertainty and protectionist measures, 19% of respondents in India expect to see improvements based on global developments. Among the countries surveyed, only Indonesia had a higher percentage pointing to positive expectations.

28% of respondents in the country said that they do not expect their companies to be affected. Of those who foresee a negative outlook, 32% expect turnover losses of up to 20%. 10% of Indian respondents believe the impact on their business’s turnover will be more significant, between 20% and 30%.

The highest proportion of uncollectable B2B receivables in Asia Pacific

Uncollectable receivables originated most often from B2B customers in construction, consumer durables, and business services. Similarly to what was stated at regional level, the main reason for writing off B2B receivables as uncollectable is the customer going bankrupt or out of business. In 2018, this was stated by 48.5% of respondents. Other frequently mentioned reasons for write-offs were the inability to locate the customer and the old age of the debt (stated by 42.2% and 40.4% of respondents respectively).

Optimistic about the coming 12 months

Suppliers in India reported that B2B customers in the chemicals and construction sectors generated some of the longest payment delays, on average 65 and 50 days late respectively. 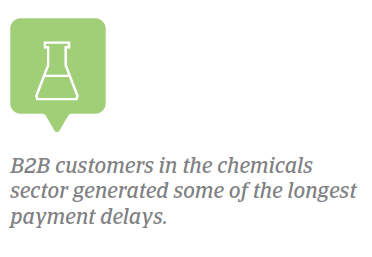 The most frequently reported reasons for payment delays in the chemicals sector are buyers using outstanding invoices as a form of financing (53%) and insufficient availability of funds (47%). Indian suppliers reported that payment delays from B2B customers in the construction sector occurred mainly because of the complexity of the payment procedure (52%) and due to disputes over the quality of goods delivered and services provided (48%).

The profit margins of Indian non-food retailers are expected to moderate in 2018 due to growing competition and the rising market share of e-commerce.

The economic growth outlook for 2018 remains robust, but a rather weak banking sector and high foreign indebtedness of domestic firms remain concerns.