Despite a minor decrease in overdue B2B invoices, 45.0% of businesses in Eastern Europe reported having to manage the negative impact of payment delays.

In 2018, Atradius Payment Practices Barometer survey respondents from Eastern Europe reported fewer late payments. However, businesses in the region still felt the impact of payment delays. 18.1% of respondents reported that they needed to postpone payments to suppliers while 14.1% experienced revenue loss. The proportion of uncollectable B2B receivables however is stable and bankruptcy remains the main reason for write-offs. 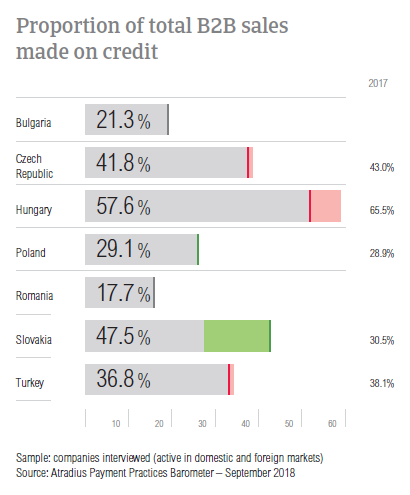 Respondents in the Eastern European countries surveyed are more likely to sell on credit terms to their domestic B2B customers than to their B2B customers abroad. Domestic credit terms seem to be granted mainly to reward long-lasting business relationships and because credit sales are common practice. There is also a shared belief that selling on credit can stimulate local expansion by attracting new customers. 41.5% of respondents said refusing to grant credit terms is mainly due to the poor payment behaviour of their domestic B2B customers and 34.2% said that it’s a decision based on the financial weakness of the customer.

Credit sales help us win new customers and brought our company a sales increase of 30%.

Businesses in Eastern Europe seem to grant trade credit to foreign B2B customers mainly for the same reasons; common practice, to build trust and relationships and to attract new customers. There are, however, different explanations for refusing credit sales. More specifically, 24.1% of respondents in the region said that they refuse to grant credit terms to their B2B customers abroad due to high currency risk and 19.0% because there is high economic and/or political risk in the customer’s country.

We trade on credit when there’s long-term cooperation and increased trust.

Most Eastern European suppliers feel the impact of late payment

Respondents from all countries surveyed in the region – with the exception of Hungary and Turkey – reported payment delays less frequently than one year ago. More specifically, 80.7% of respondents in Eastern Europe reported frequent late payments by their B2B customers compared to 83.7% in 2017. Late payments seemed to occur significantly more frequently with domestic B2B customers than with B2B customers abroad. 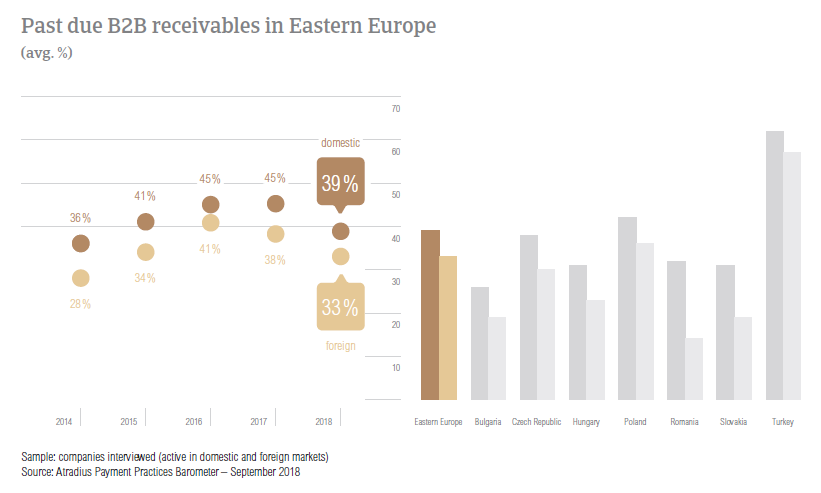 In 2018, the average Days Sales Outstanding (DSO) figure recorded in Eastern Europe is 59 days, two days shorter than last year. Similarly to 2017, the majority of respondents in the region (62.5%) do not expect to see any changes in their company’s DSO figure and 20.8% expect a slight increase over the coming 12 months.

A faster invoice to cash turnaround

Payment delays mainly due to insufficient availability of funds 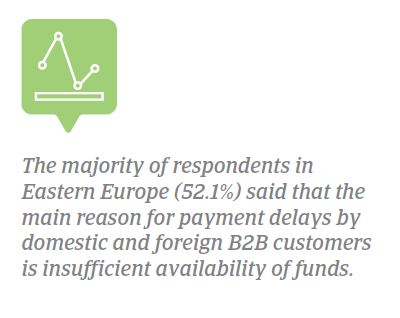 68.8% of respondents in Eastern Europe said that the main reason for payment delays by their domestic customers is insufficient availability of funds; a much higher percentage than in 2017 (58.4%). This steep increase occurred mainly because of the high percentage registered in new survey countries Bulgaria and Romania plus increases reported in Turkey, Slovakia and the Czech Republic. Another important reason for payment delays by domestic B2B customers, stated by 30.9% of respondents in the region is buyer using outstanding invoices as a form of financing.

The fastest/slowest invoice to cash turnaround in Eastern Europe 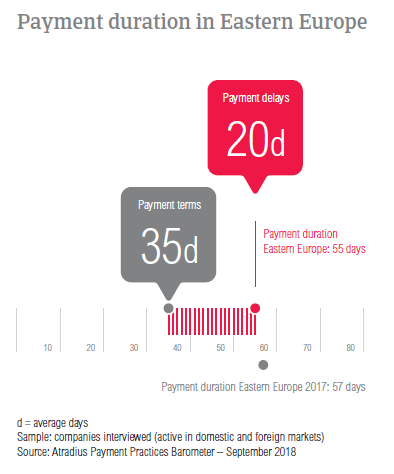 E-invoicing: common practice but no clear effect on payment duration

65.7% of respondents in Eastern Europe said that they are already using electronic invoicing (e-invoicing) with their B2B customers. By country, e-invoicing appears to be most broadly used in the Czech Republic (77.9% of respondents). They are followed by their peers in Poland and Slovakia (72.6% and 70.2% respectively). In contrast, with a percentage of 48.7%, respondents in Hungary are the most reluctant to invoice online. However, with 15.1%, Hungary is also the country where the respondents are most willing to adopt e-invoicing this year. 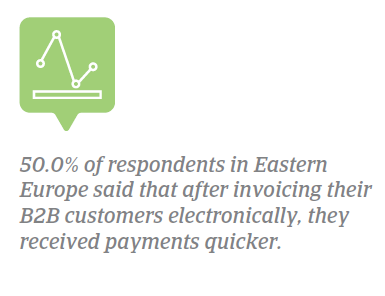 While the survey responses do not show a major difference between the respondents who have experienced faster payments and those who have seen no noteworthy effect – the average payment duration in Eastern Europe decreased slightly.

US protectionism – the biggest risk to global economic growth

While businesses trading internationally expect negative effects brought by US protectionism and a potential trade war, they do not seem as concerned about the Fed policy or a potential hard landing in China. These were considered to be the most significant risks to global economic growth by only 16.2% and 21.9% of respondents respectively. At the other end of the scale, 42.3% of respondents in the region mentioned geopolitical risk as the least significant risk for the coming six months. 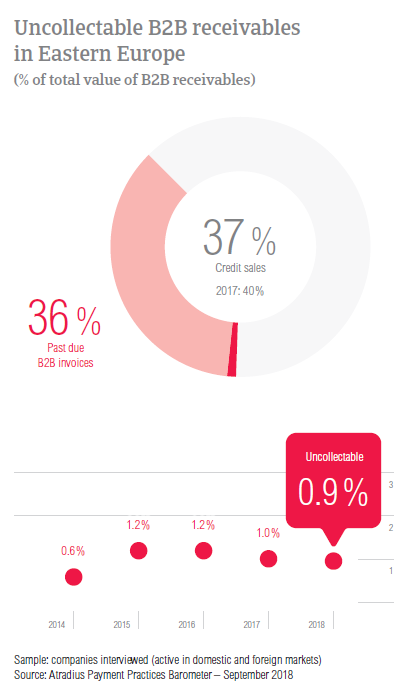 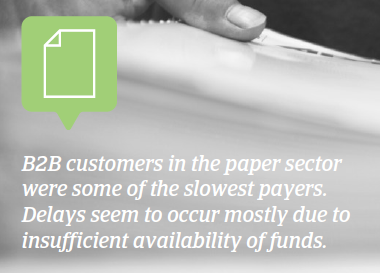 B2B customers of respondents in the construction materials and those in the paper sector seem to have generated some of the longest payment delays. Domestic and foreign B2B customers in these sectors paid, on average, 19 and 18 days late respectively. Similarly to what was stated for the region overall, the main reasons for payment delays were insufficient availability of funds and buyers using outstanding invoices as a form of financing.

Looking at changes over the coming 12 months, most respondents in construction materials (44.0%) do not expect any changes in the payment behaviour of their B2B customers. Should a change occur, 33.0% believe that it will be a deterioration. Respondents in the paper sector showed similar results, 52.0% do not expect any changes while 32.0% foresee deterioration in the coming 12 months.

Payment behaviour in the Polish chemicals sector has been good over the past two years, and the number of non-payments and insolvencies has been low.

The recent bout of lira depreciation in the run-up to the snap elections has reduced import demand from Turkey and increased payment risk.