The herculean task of restructuring Argentina's debt is underway but the risk of a disorderly default remains high.

Some hundred days have passed since centre-left Peronist Alberto Fernández won Argentina’s presidential election on 27 October 2019. He assumed office on 10 December, together with former president (2007-15) and newly inaugurated vice-president, Cristina Fernández de Kirchner (no relation).  The top priorities of the new administration are reviving the economy, restructuring sovereign debt to avoid a disorderly debt default, and rebuilding trust.

However, the formation of this new government as well as recent policy actions highlight a tough balancing act facing the new president, as he seeks to address the various demands of different Peronist factions, of the Argentine people and of investors. Among many uncertainties, one thing is for sure: the economic hardship for Argentinians is not over yet.

President Alberto Fernández is generally considered to be a moderate Peronist, unlike Vice President Cristina Fernández de Kirchner, who belongs to the left faction. The new cabinet appears to be a compromise between moderate Peronists and those loyal to Ms Fernández de Kirchner (so-called ‘Kirchneristas’). Mr Fernández’s choices for key economic positions demonstrate his centrist approach, but also clearly indicate a shift away from orthodox policies pursued by the former Macri government (2015-19). Such appointees include economist and IMF-critic Mártin Guzman as economy minister and Miguel Angel Pesce as governor of the central bank. Mr Pesce served as central bank vice-president (2004-15) under several Kirchner governments and was a critic of the orthodox monetary policy under Macri. Some other key positions went to hardline left Kirchneristas including agriculture, interior and defence minister, head of the government’s tax authority, and attorney-general.  Additionally, Ms Fernández de Kirchner has significant power in Congress, which the vice-president constitutionally chairs, and where her son Máximo Kirchner heads the Peronist bloc of the lower house.

Argentina’s economy is in recession since 2018 (expected to have contracted 2.4% in 2019 and to shrink 1.2% in 2020). Inflation is stubbornly high at an annual rate of more than 50%, unemployment is over 10%, and the poverty rate has increased to more than one-third of the population. All this follows several crises in confidence, most recently last summer when former president Macri unexpectedly lost the primary elections. They resulted in a massive peso depreciation (by 50% in 2018 and 37% in 2019), forcing the previous government to impose partial currency restrictions as of September 2019 and to request a re-profiling of its foreign currency debt in the wake of a spike in debt amortisations in 2020, dwindling foreign currency reserves and a derailed IMF programme.

Within a few weeks after taking office, the new government launched several emergency measures to re-start the economy. A price freeze for utilities was extended by six months, prices for medicines were reduced, public- and private sector wages were raised, the most vulnerable population groups received tax rebates and a one-time bonus for minimum pensions, and distressed small and medium-sized enterprises were provided with refinancing options. In addition to those fiscal measures, new central bank president Pesce cut interest rates five times since taking office, from 63% to 48% since 30 January 2020, meaning that real rates are now negative.

In order to support government finances, prevent capital flight and protect official reserves, the government took additional measures. It doubled the tax on personal property, reinforced existing exchange-rate controls, raised export duties on agricultural exports (12% for a range of agricultural products and 30% for soy products), and introduced a new 30% tax on individual USD savings (domestic and abroad) and purchases of USD (for goods and services). This means that all USD purchases (savings, credit card, travels, etc.) are now taxed at 30%, with a few exceptions.

All those measures were generally received as being fairly pragmatic. As they showed some commitment to fiscal prudence, local debt markets re-opened after the August-November 2019 shut down. So far, the administration succeeded in stabilising official reserves and the exchange rate, although pressures on the currency are building up: the peso is trading at some 78 per USD on the black market compared to the official exchange rate around 60 per USD. This pressure reflects that, in general, investor sentiment remains weak, and that the current measures will hamper investments, raise inflationary pressures and reduce long-term economic growth. 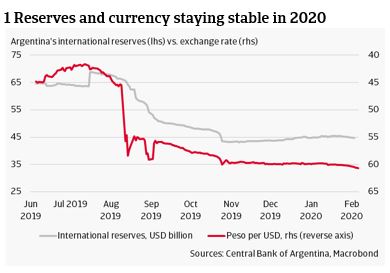 Restructuring the sovereign’s debt is the top priority of new economy minister Guzmán. According to the IMF, the federal government faces major debt repayments this year of some USD 80 billion, of which almost USD 35 billion in foreign currency. Two-thirds of this foreign-currency debt service – USD 23 billion – is owed to private creditors. As a substantial part of this is already due in Q2 (see chart), the government has little time to strike a deal, setting a 31 March deadline for the conclusion of the debt talks. This is highly ambitious, not least because the process has been very slow thus far. Whereas the group of some 80 international bondholders succeeded in setting up a creditor group last December, the government waited until the second half of January in order to formally start the process (see timeline). Additionally, the schedule is very tight and leaves the international bondholders little time to accept the offer. 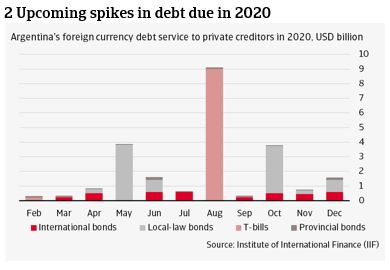 Meanwhile the government has started the restructuring of its local currency debt, when it exchanged the equivalent of approximately USD 1.7 billion short-term local currency fixed-rate debt instruments (LECAP) maturing in the coming months for new variable-rate instruments due later in the year. This (voluntary) debt exchange not only extended maturities, but also involved a reduction of the debt-service by some 16%. Rating agencies responded by a downgrade of their local currency sovereign ratings for Argentina to selected default. They maintained their foreign-currency sovereign debt ratings in the C-category, implying a high probability of default on Argentina’s foreign-currency obligations. This debt exchange also confirmed investor’s beliefs that the restructuring of the international bonds will imply a large haircut, although President Fernández initially had said that he aimed for a ‘Uruguay type’ restructuring, implying just a lengthening of maturities. Markets responded negatively to the debt exchange with five-year credit default swap (CDS) prices jumping above 5000 basis point from 4150 prior to the exchange.

The way the province of Buenos Aires in early January narrowly escaped a default on an international bond suggests that international bondholders, many of whom also hold sovereign bonds, will adopt a firm stance. The province had sought a three-month extension for a USD 250 million debt payment, and the negotiation process was generally seen as the first big test of how Argentine authorities and the creditors of their international bonds will act. Despite strong pressure from the federal government on the bondholders to accept the extension, the local government fell short of the 75% needed approval rate and made the payment.

Clarity on policies and IMF programme key, but still absent

The success of the sovereign debt talks requires greater clarity about the government’s economic policies and the role of the IMF. The new administration faces a tough balancing act – between campaign pledges of no more austerity measures and investor demands of a clear macroeconomic plan to enhance the long-term sustainability of government finances. Economy Minister Guzmán has had several meetings with IMF officials in the past weeks and an IMF technical mission is expected to visit Buenos Aires from 12-14 February to exchange views on macroeconomic plans and to assess the sovereign’s debt sustainability. However, the scheduled timeframe of just three days looks too short to investigate the possibility of a programme to replace the USD 57 billion IMF stand-by-arrangement that is off-track since the confidence crisis started last summer. Moreover, recent press statements of Mr Guzmán that the government would not accept IMF conditions are not very reassuring either.

Given the tight time schedule, the lack of a comprehensive economic plan, the uncertainty about the government’s intentions with the IMF and the low level of official reserves, the risk of a disorderly debt default is high. However, such a default would be detrimental to the goal of reviving the economy and rebuilding confidence. It would destroy the little confidence still left, result in peso depreciation, higher inflation, a further tightening of currency controls, and lead to a return to the pariah status the country had on the international capital markets between 2001 and 2014.

All this would make it impossible for the government to finance its social programmes and re-start the economy, which in turn would mean that the economy would continue to contract, raising social protests and reducing Mr Fernández’s chances of winning mid-term elections in 2021. Given the impact of a disorderly default on the society, we therefore assess a slightly higher probability to the chance of reaching some sort of deal than to a disorderly default. Either way, the economic hardship for the Argentine people is not over yet.

Peronists back in power, herculean task ahead

Regaining investors’ trust will be key to Fernández’s success in reinvigorating the Argentinian economy, but it is not the only thing.

Argentina has introduced currency controls to stabilise peso in the run-up to elections.