The ongoing drought has put additional pressure on margins industrywide due to higher input costs, and many businesses are struggling to break-even. 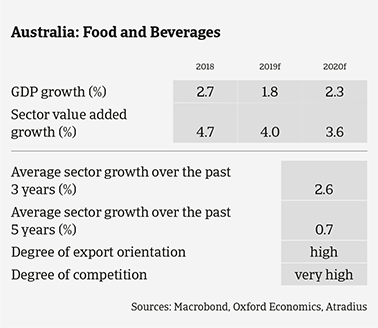 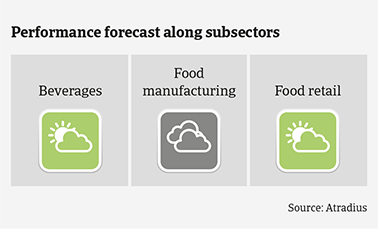 Australian food production has grown steadily over the past couple of years. However, the Australian agricultural sector suffers heavily from the ongoing draught, especially on the East Coast. Agriculture value added growth deteriorated by more than 7% in 2018 and is forecast to decline almost 5% in 2019.

As a consequence of the ongoing draught, input prices have increased, especially for livestock, meat, and grain. This has led to further deterioration of profit margins for many food producers and processors, with no relief in sight in the coming months.

Price wars are fairly common in the food retail sector, where bigger players compete for market share by pushing prices down. This also puts pressure on the margins of food producers and processors. As a consequence mergers and acquisitions have continued amongst food producers in order to achieve economies of scale.

While the gearing of food businesses is generally high, financing conditions in the industry are good as banks are generally willing to provide loans to the industry. Banks have also provided additional drought relief funding to farmers.

Payments in the Australian food sector take 45-60 days on average, and payment delays in the sector have increased slightly in 2019. As the ongoing drought has put additional pressure on margins industrywide due to higher input costs, many businesses are struggling to break-even, and some have even incurred losses. Therefore insolvencies are expected to increase about 3% in 2020.

Our current underwriting stance differs according to subsector, while we monitor the future impact of the current draught on the industry. We remain open for food retail, despite lower profit margins and fierce competition, as demand will remain high. We are generally very open for the beverages segment, which mainly consists of well-established companies with solid financials. However, we are cautious with producers of low cost wines, which suffer from extremely slim margins and downward pressure on prices due to oversupply in China.

Our underwriting stance is generally open to neutral for dairy manufacturers and processors, but more cautious for agents/wholesalers, as large players dominate the sector and often buypass wholesalers. Exporters of infant formula milk to China face strict requirements to obtain brand registration (no additional exporters have been granted the required brand registration since early 2018). Chinese authorities have also tightened the rules for the sale of overseas infant formula into the country.

The meat sector remains restrictively underwritten due to tight supply, increased input costs and high livestock prices triggered by the drought. For farmers and wholesalers margins remain severely under pressure. That said, pork processors have started to benefit from increased Chinese demand and rebounded sales prices since 2018, due to the severe African swine fever outbreak in China.

Australia’s ICT sector continues to perform well while the IT market in particular is expected to have considerable medium-term growth potential.

Business insolvencies expected to increase 6% in 2016 as the slump in the mining sector continues.