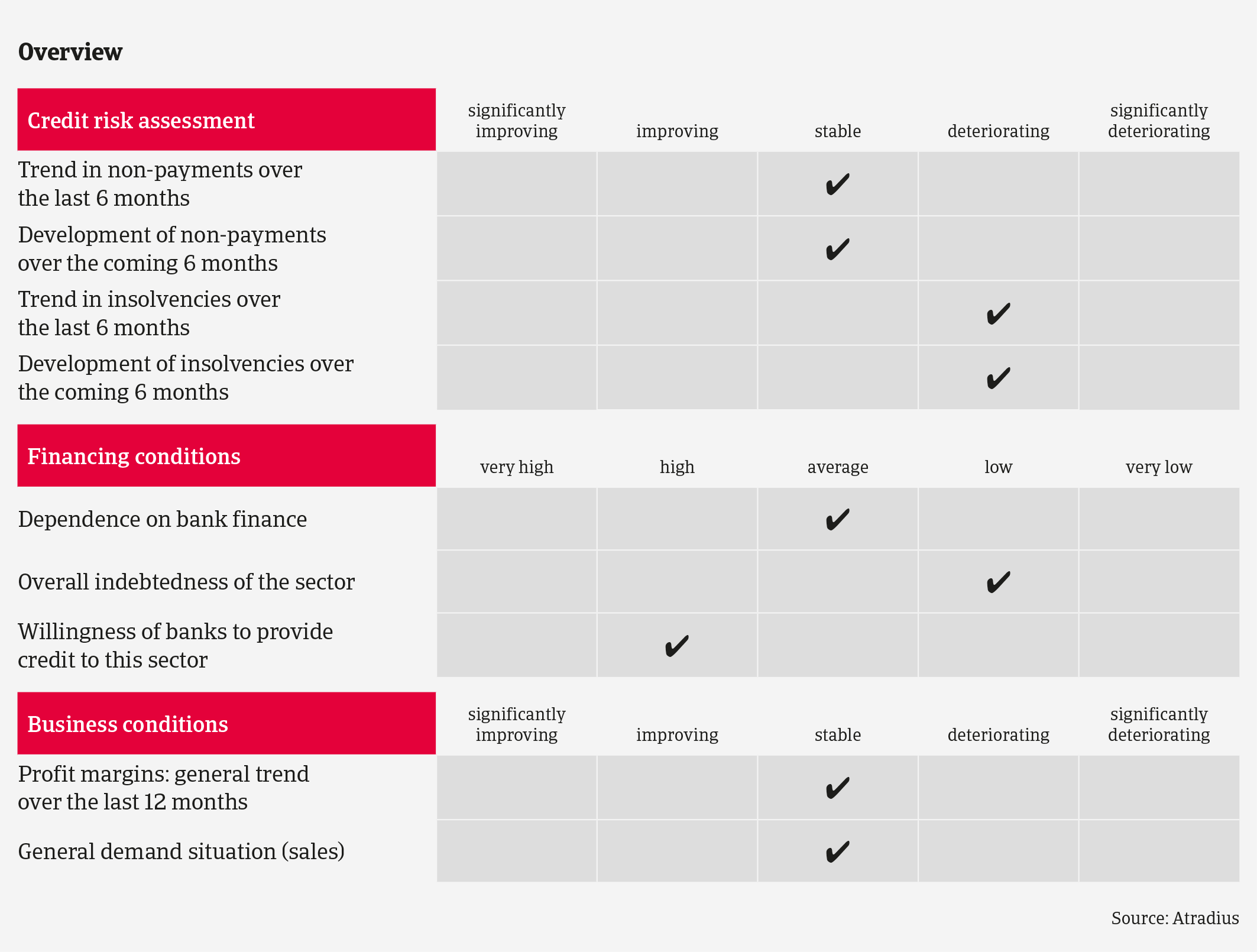 While the Dutch food and beverages sector continues to expand in 2019 and 2020, value added growth is expected to slow down compared to 2018. A poor harvest in 2018 and decreasing livestock will lead to a production decline of about 1% in 2019. However, the profitability of Dutch food businesses remains generally high, with a stable outlook for 2020.

Domestic food retail sales are expected to increase by about 2% in 2019 and 1.5% in 2020, but price increases will impact sales volumes. Sales of supermarkets continue to excel while those of specialty stores are expected to decrease 1% in 2019 after a 0.5% contraction in 2018. Specialty shops for organic food have difficulties retaining their market position, due to a consolidation of bigger stores in this segment and growing competition from regular supermarket chains. Online food retailing continues to grow at double-digit rates, and market share is expected to increase to 10% in 2025 from 5% in 2019.

The Netherlands is one of the world´s largest exporters of agricultural-food products, with a focus on meat and dairy (e.g. 65% of dairy production is exported). Export of agrifood amounted to EUR 90.3 billion in 2018 (up 0.2% year-on-year after growing 6% in 2017 and 4% in 2016). The EU accounts for more than 75% of Dutch food exports, while the value of deliveries to China and the US rose sharply in the first nine months of 2019.

For Dutch food businesses, the impact of US import tariffs on EU food imports is rather limited so far, with no major pressure on Dutch wholesale exports expected. Beer and cocoa as the largest export goods are not yet affected by tariffs, while dairy products could suffer a minimal loss of below 0.2% valued added. However, in case of an escalation of the US-EU trade dispute beverages (beer) export could suffer. 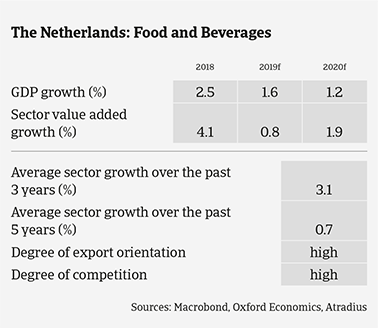 The nitrogen emission issue is a major challenge

Environmental issues pose a potential major challenge for the Dutch agriculture and food sector. In May 2019, the country’s highest court ruled that the way Dutch builders and farmers dealt with nitrogen emissions was in breach of EU laws. Since September 2019, vital infrastructure and building projects worth approximately EUR 14 billion have been put on hold, and an independent report called for drastic measures to reduce livestock and change feed composition. The agricultural sector causes 57% of Dutch nitrogen emissions, of which the largest part (56%) is produced by cows. Despite a reduction of livestock since 2018, total nitrogen emissions have barely decreased.

Value added in the Dutch agricultural sector is forecast to decline 0.7% in 2019 and 0.4% in 2020. It comes as no surprise that uncertainty over environmental issues has spilled over to the dairy and meat production and processing subsectors. While the dairy segment currently benefits from higher sales prices compared to 2018 (relieving pressure on operating profits), and valued added increased 1% in 2019, the phosphate reduction scheme for dairy farming and the nitrogen issue will put structural pressure on growth in this segment.

Meat subsector valued added contracted 2.5% in 2018. It is expected to level off in 2019 and grow by about 1.5% in 2020. Changing consumer habits and environmental issues weigh on the long-term prospects of the industry, as the limits of growth seem to have been reached in intensive livestock farming, with major reductions on the horizon.

Stable profits and good financial situation for the time being

However, the short-term performance is still good. The Netherlands are the largest importer and exporter of poultry in Europe, and sales performed well in 2019. However, cheap poultry rom Poland and Ukraine is putting the segment under pressure. Pork meat sales currently benefit from increasing exports to China (up 55% in January-August 2019), triggered by the African swine fever epidemic in Asia. While sales prices of pork meat are expected to remain high in 2020, higher cost levels affect the international competitiveness of Dutch meat producers with businesses in other countries (e.g. Brazil and the US).

The average payment duration in the sector is 45 days, and the amount of payment delays, protracted payments and insolvencies remains low compared to other Dutch industries. However, the catering/hospitality segment recorded a sharp rise in the number of business failures over the past twelve months. We expect food insolvencies to increase about 2%-3% in 2019, with another modest increase of 1% expected in 2020.

Due to the still good short-term performance with stable profits and a robust financial situation (banks are generally willing to provide loans, while the indebtedness of Dutch food companies is low compared to EU peers) our underwriting stance remains open to neutral for most major food subsectors. However, in the retail segment we are restrictive concerning organic food specialty stores and catering/hospitality businesses. 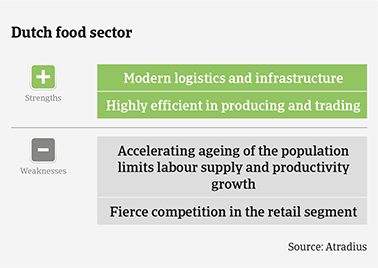 Downside risks ahead, as demand from automotive is decreasing, while the nitrogen debate could seriously impact construction as a key buyer sector.