Ireland’s highly open economy is cooling off and demand in export markets is set to remain weak while the domestic economy faces increasing capacity constraints and lower government spending.

The country’s insolvency outlook is weak, in part due to its close economic ties to the UK and the ongoing uncertainty about Brexit. However, while an increase in insolvencies is expected this year, an average 2% uptick is forecast for 2020.

Increased use of trade credit in domestic and export B2B transactions

In line with all the countries surveyed in Western Europe, Ireland appears to have increased the volume of sales to B2B customers made on credit over the past year. This now amounts to 65% of the total value of respondents’ B2B sales, up from 47% one year ago, and is above the 60.4% regional average. The more extensive use of trade credit shown in our survey results may signal a need to grow sales, both domestically and in particular on foreign markets, where demand is set to remain weak chiefly due to the persisting uncertainties about global trade policies. 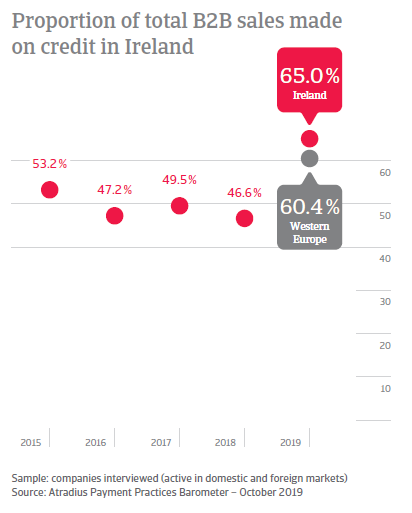 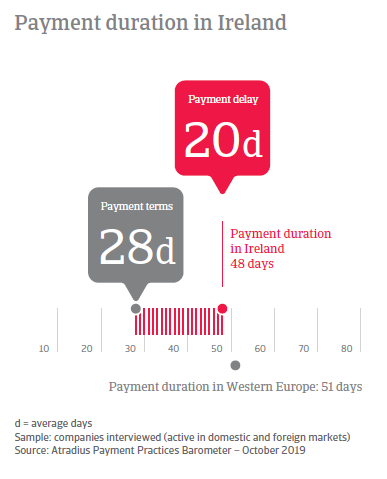 Irish respondents request B2B payments much earlier than one year ago

Not unexpectedly due to the continuing uncertainty surrounding Brexit and the related bleak insolvency outlook for Ireland, suppliers requested payments much earlier than last year. In Ireland, average payment terms stand at 28 days from invoicing (down from 31 one year ago) and below the 34 days average for Western Europe. Ireland and the UK are the only two countries surveyed in Western Europe for which average payment terms are shorter than last year.

In Ireland, nearly one third of the total value of B2B invoices is overdue

Survey findings in Ireland show that nearly a third (32.4%) of the total value of the B2B invoices issued by respondents over the past year remained outstanding at the due date. This is above the 28.9% average for Western Europe. Compared to the same survey period one year ago, payment practices in Ireland remained the same, with an average of 63% of B2B invoices paid on time. Despite this, respondents in Ireland turn overdue invoices into cash earlier than one year ago (on average 49 days from invoicing, down from 52 days). This is likely to represent an increase in the collection of short-term outstanding invoices. This variation is in line with survey findings for Western Europe, where the average payment duration decreased to 52 days down from 55 days last year.

Fewer respondents in Ireland (32%) than in Western Europe (42%) reported no significant impact on business from late payments. In contrast, 36% of Irish respondents (far more than the 28% at regional level) needed to delay payment of invoices to their own suppliers. 20% (compared to 14% in Western Europe) needed to request a bank overdraft extension. When it comes to the collection of long-term past due invoices, respondents in Ireland appear to be less successful than last year. Survey findings also reveal an increase in the proportion of B2B receivables written off as uncollectable, at 2.5% of the total value of B2B invoices, up from 1.4% last year and above the 2.2% average for Western Europe.

Fewer survey respondents in Ireland (46%) compared to Western Europe (55%) believe their B2B customers’ payment practices will remain the same over the coming months, while 33% of Irish respondents expect their B2B customers’ payment behaviour to deteriorate over the same period, resulting in an increase in the proportion of long-term outstanding invoices. To strengthen their receivables management, protect liquidity and ultimately business profitability, respondents in Ireland plan to increase the use of credit management techniques. More specifically, nearly one quarter plan to request cash payments from their B2B customers, while monitoring credit risk on a more regular basis over the coming months. The same percentage of respondents in Ireland as in Western Europe (25%) believe that access to bank financing will be tighter over the coming months. Among respondents who share this opinion, 36% (above the 30% at regional level) plan on reacting to tighter access to bank finance by reducing the workforce through layoffs or hire freezes. For 33% of Irish respondents (the same percentage as at regional level) restricted access to bank finance will cause delays in business investment or lead to a cutting of operational costs.

Overview of payment practices in Ireland

Based on survey findings in Ireland, B2B customers of respondents from the construction sector are given the longest payment terms, averaging 37 days from invoicing. Average payment terms across the other sectors surveyed in Ireland range from a high of 32 days in the transport sector to a low of 12 days in the consumer durables sector.

Payment default risk increased in the Irish chemicals sector over the past year, due to a sizeable decrease in timely payments (65.1% of invoices paid on time compared to 74.7% last year). In this sector, overdue payments amount to 32% of the total value of issued invoices. B2B payment practices also deteriorated in the Irish agri-food, construction and machines sectors. Across the other sectors surveyed in the country, the percentage of overdue invoices ranges from an average of 45% in the machines sector to 28% in the ICT/electronics sector, which is less vulnerable to fluctuations in external demand.

The consumer durables sector in Ireland recorded the highest proportion of B2B receivables written off as uncollectable (3.3%, up from 2.3% last year). This is despite a significant improvement in the average invoice-to-cash turnaround, down to 44 days from 63 last year. Across the other sectors surveyed, the average proportion of uncollectable B2B receivables ranges from 2.7% in the agri-food sector, to 1.7% in the transport sector.

SMEs in Ireland record the highest proportion of past due invoices

Survey findings reveal that 37% of the total value of B2B invoices issued by SMEs in Ireland are overdue (this is the same as last year). Despite a decrease in the proportion of invoices paid on time (59%, down from 62% last year), respondents from Irish SMEs collect overdue invoices within the same time frame as one year ago (on average within 51 days from invoicing). Respondents from large enterprises are able to cash in overdue payments on average 45 days from invoicing, down from 53 last year. Similarly, respondents from micro enterprises recorded an average 45 days invoice-to-cash turnaround, (down from 51 days last year). 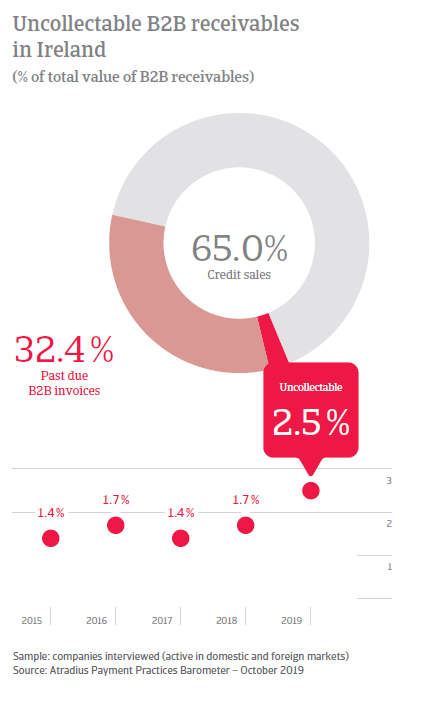 Alun Sweeney, Atradius Country Manager for the United Kingdom and Ireland commented on the report: “The Irish economy is expected to maintain its momentum this year but the pace of growth for 2020 will be largely dependent on the Brexit outcome, with the ongoing economic uncertainties stemming from Brexit already moderating growth forecasts.

These uncertainties could significantly affect Ireland’s export flows, with the UK market accounting for at least 15% of Irish goods and 20% of exported services. A potential economic downturn in the UK and a chaotic outcome to the EU-UK negotiations could have a negative impact particularly on both the Irish manufacturing and food sectors, due to their high dependency on exports to the United Kingdom.

The economic outlook for Ireland, therefore, is more uncertain than in the past. Consequently, businesses are expressing concern that their customers’ payment practices could deteriorate which would affect liquidity and put a strain on growth prospects.
It is essential for Irish businesses trading in this environment to focus on strategic credit management and credit control processes. This would also help them improve collection of long-term overdue invoices which our survey shows is an area where businesses are less successful than in the past.”

The Irish economy is expected to grow by about 2.5% in 2019, but remains exposed to ongoing economic uncertainties stemming from the Brexit decision.

The UK is facing the highest increase in insolvencies in 2019 and 2020 in Western Europe.

Despite the looming Brexit uncertainty, the UK technology sector attracted more venture capital investment in 2018 than any other European country.